I Am Invincible Reaches New Peak with 2018 Service Fee Increase

Elite sire I Am Invincible (Invincible Spirit) will be the second most expensive stallion standing in Australia in 2018 after having his fee increased to $192,500 (all inc GST) this year, Yarraman Park Stud has announced.

The Hunter Valley-based Mitchell family-owned Yarraman Park Stud has upped the service fee for I Am Invincible for the second year in succession, continuing the remarkable rise for the son of Invincible Spirit (Green Desert).

I Am Invincible, who will stand alongside his sire son and Yarraman Park Stud newcomer Hellbent and Hinchinbrook (Fastnet Rock) this year, is second only to Snitzel (Redoute’s Choice) who will command a fee of $220,000 in 2018.

Today’s announcement by Yarraman Park Stud also sees barnmate Hinchinbrook earn a fee increase and will stand at $55,000, while last-start Group One winner Hellbent’s introductory fee has been set at $27,500.

Arthur Mitchell told ANZ Bloodstock News that I Am Invincible’s feats with this year’s two-year-old crop, which came from a $27,500 service fee, meant he was deserving of his place among the nation’s most expensive stallions at stud.

“I think with what he has achieved on the track and in the sales ring he sits near the top of the tree and is just behind Snitzel, so we think he warrants that sort of service fee,” Mitchell said.

“He had an outstanding book of mares last year led by Black Caviar and other Group One winners.

“He has had four Group-winning two-year-olds and that is not including Oohood who was placed in the three major two-year-old races, so with the better mares coming through there is no reason why he can’t stay at the top,”

I Am Invincible is the sire of 31 individual stakes winners, including this season’s Group One winners Viddora and Hellbent, and in total has had 18 stakes-winning progeny this season.

Hinchinbrook has also enjoyed a stellar season, with Yarraman Park Stud lifting the son of Fastnet Rock’s (Danehill) fee from $44,000 to $55,000 this year.

The rise of Hinchinbrook, who has sired 14 individual stakes winners, can also be demonstrated by his regular service fee increases, having stood for $16,500 for his first five years at stud before an increase to $38,500 in 2016.

“He has had six stakes horses in the in the last month or two with Flippant, Spright, Whispering Brook, Seabrook and, of course, Beat The Clock who is going to start favourite in the Group One (Chairman’s Sprint Prize) in Hong Kong on Sunday,” he said.

Trained by Mick Price, Seabrook also won the Sweet Embrace Stakes (Gr 2, 1200m) during her Sydney campaign to showcase her sire Hinchinbrook, who is a three-quarter brother to reigning champion Australian sire Snitzel.

Last month, Yarraman Park Stud confirmed that Hellbent would join his father I Am Invincible on the stallion roster in 2018.

Retired after his breakthrough William Reid Stakes (Gr 1, 1200m) success at Moonee Valley, the Darren Weir-trained five-year-old entire won seven of his 23 race starts, including a further two Group One placings, with prize money earnings of $901,450.

“We targeted him early on and bought into him. He probably should have won a Group One last year. He is a top-class sprinter with an outstanding turn of foot,” Mitchell said.

“He ran in four Group Ones and was probably a bit stiff in all of them. He should have won the William Reid last year, he was stiff in the Oakleigh Plate this year when beaten a head and a head.

“We think he is a good chance and is a very good looking horse.” 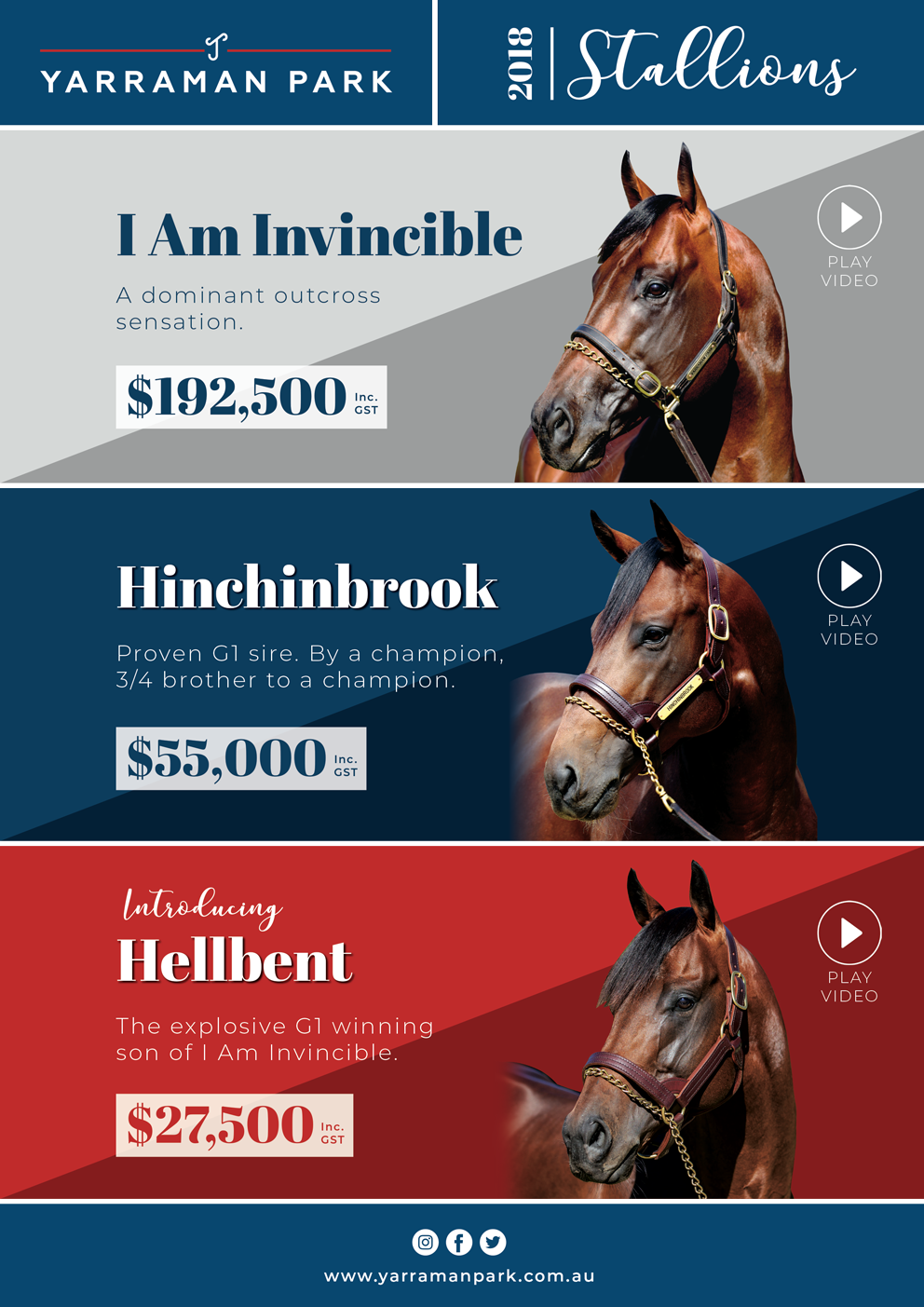