I Am Invincible’s outstanding Group I winning $3million earner Invincibella lit up the sale ring at the Gold Coast on Monday afternoon when fetching $1.3million to the bid of Coolmore’s Tom Magnier.

Trained throughout her career by Chris Waller, the six year-old daughter of I Am Invincible is another success story for Denise Martin’s Star Thoroughbreds.

She was purchased from this sale ring as a yearling for $185,000 and proved a remarkable racehorse improving in every season to win three Magic Millions Filly and Mare races in consecutive years and also attained Group I status winning the Tatts Tiara in 2019.

“When I bought her as a yearling she was bred off an $11,000 service fee and, at the time, I Am Invincible hadn’t reached the stellar heights he has now, but throughout the years she just got better and stronger as she got older and, remarkably, her best racing year was when she was six,” Denise Martin told ANZ Bloodstock News. 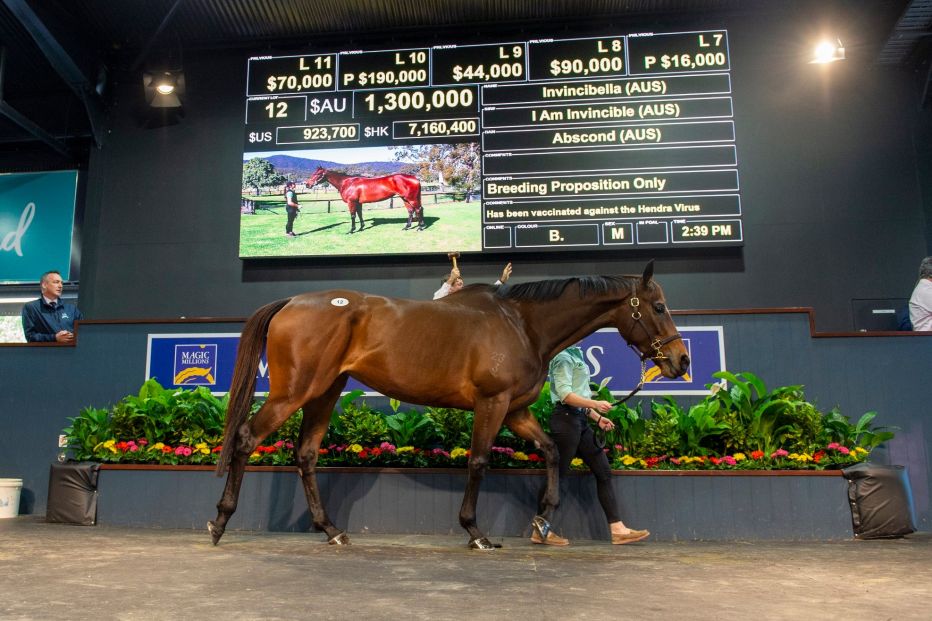 A half-sister to stakes-winner Secret Blaze, Invincibella features some tough staying blood through her female family with her first three dams by Galileo, Zabeel and Noble Bijou, with Coolmore announcing she will visit Triple Crown hero Justify this spring.

“She won $3 million on the track, so her race record speaks for itself as a Group 1 winner, but beyond that she is such a great individual. She has a great head, so typical of the I Am Invincible’s with a great hindquarter on her, a wonderful shoulder and girth and she is truly a queen,” Coolmore representative James Bester told ANZ Bloodstock News.