I Am Invincible was in hot form at Caulfield on Saturday posting a Group double with his flying fillies La Mexicana and Prophet’s Thumb.

Five wins from seven starts is indicative of three year-old La Mexicana’s fierce will to win. The heavily backed daughter of I Am Invincible needed to call on all her courage to edge out Malicorne in Saturday’s Group III Kevin Hayes Stakes (1200m).

Tracking the early speed, Jamie Kah was gifted an uninterrupted rails run on La Mexicana and it proved the difference in the end as she edged out Malicorne by a nose.

The Anthony and Sam Freedman-trained filly advances her record to five wins a second and a third from seven starts with earnings of $357,545.

“She was in a bit of a mood today. Jamie rides her beautifully and knows her so well,” Sam Freedman said.

“She is not the easiest filly to deal with. She’s had her issues in the past, but she has a bit of grunt about her and she is in for the fight when they come alongside her.”

The winner of the Listed MVRC William Crockett Stakes at Moonee Valley last spring, La Mexicana was purchased by Belmont Bloodstock Agency (FBAA) for $320,000 out of the Lime Country draft at the 2019 Magic Millions Gold Coast Yearling Sale.

She is the second winner from as many foals out of the stakes-winning Domesday mare Cailin Miss, from the family of Victoria Derby and South Australia Derby winner Brewery Boy and Doncaster Handicap winner Lygon Arms. 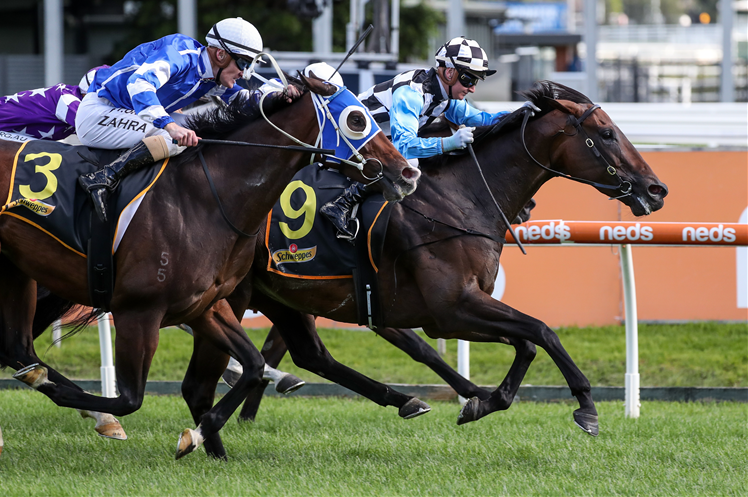 The five-year-old mare Prophet’s Thumb completed a stakes three-timer for Jamie Kah, a double for Anthony and Sam Freedman and a double for I Am Invincible when capturing the Group II Schweppes Rubiton Stakes (1100m).

It was the first win for Prophet’s Thumb since switching to the Freedman stable over a year ago.

The winner of the Listed ATC Fireball Stakes (1100m) at Randwick almost two years ago, Prophet’s Thumb had been winless since capturing a mares race over 1100m at Caulfield in September 2019 when trained by David Pfieffer.

Carrying the colours of Bell River Thoroughbreds, Prophet’s Thumb stuck to her guns resolutely down the straight to win by a short neck.

It advances her record to five wins, two seconds and five thirds from 25 starts with earnings of $467,980.

“It’s a big thrill for the Fergusons who are good people and really good friends,” Sam Freedman said.

“They bred her and own her, and her mother is a brilliant broodmare. She has thrown More Prophets in Sydney who looks a progressive mare and we have a 2yo who looks quite handy as well.

“It is important for mares to get races like this on their CV.”

She is the first foal of the winning Reset mare Set To Skelter who was sold at the Bell River Thoroughbred dispersal to Wattle Grove Thoroughbreds for $150,000 at the 2016 Inglis Australian Broodmare Sale.

A full-sister to the Listed VRC Bagot Handicap winner Module, Set To Skelter is a daughter of the Listed AJC Breeders’ Classic winner Miss Helterskelter.