The unbeaten Nettuno was part of a big Saturday for his always in-form sire I Am Invincible and the Tony Gollan-trained G3 Ken Russell Memorial Classic winner is part-owned by his proud breeders, Yarraman Park Stud.

So taken with the I Am Invincible colt produced by the G3 Grand Prix S. winner Saint Minerva (Galileo {Ire}) that he was happy to keep a share after he made his way through the ring at the 2021 Magic Millions, Yarraman Park Stud’s Arthur Mitchell was amongst those cheering home the very exciting Nettuno.

Odds-on at his Sunshine Coast debut in late March, the Tony Gollan-trained colt showed good pace to sit outside the leader, taking over with 250 metres to go and- racing clear to a 4.5l victory in a race that was a good one for Yarraman with Hellbent – I Am Invincible’s G1 William Reid S.-winning son – siring the runner-up Quicken Up.

Nettuno and Ryan Maloney get the job done to take out the Ken Russell Memorial Classic 🙌@tonygollan pic.twitter.com/IkDZiLioWm

Despite a step up in grade, Nettuno was an even shorter-priced favourite when heading to Doomben a couple of weeks later – winning eased down by 4.5l.

It was another rise in class on Saturday but again favourite, he dug deep when challenged. No big margin this time – his usual turn of foot dulled by the demanding conditions – but it was a gutsy performance.

“He didn’t like that Heavy going very much,” Arthur Mitchell said, “Those tracks just aren’t the go for the Vinnies.

“I Am Invincible’s wet track statistics are not very good,” he noted, adding that the conditions that have prevailed over the recent Sydney carnivals have put a dent in the outstanding stallion’s crack at the Champion Sire title.

An honour which would mean a lot to Yarraman – “It would be huge for him to be crowned Champion Sire, especially considering where he has come from. And it would be such a big thrill for the stud.”

The writing does seem to be on the wall for I Am Invincible who hasn’t hit a slow spot at any stage during his career, consistently featuring in the top group of stallions. For the last four years he has been Australia’s second leading sire, obviously always in elite company – second last year to Written Tycoon in front of Not A Single Doubt and Snitzel who had claimed the previous four titles.

In the three seasons finishing second behind Snitzel he was ahead of Pierro, Street Cry (Ire) and Fastnet Rock. Maybe this is the year as he currently sits just $209,017 behind So You Think (NZ).

Regardless of his season by season statistics, everyone recognises what a great stallion I Am Invincible is – especially broodmare owners with his book (his fee back up to his pre-COVID price of $247,500 {inc GST}) already full.

And a high-quality book it is too, Mitchell proud when looking back at the mares his beloved ‘Vinnie’ served in the early days. 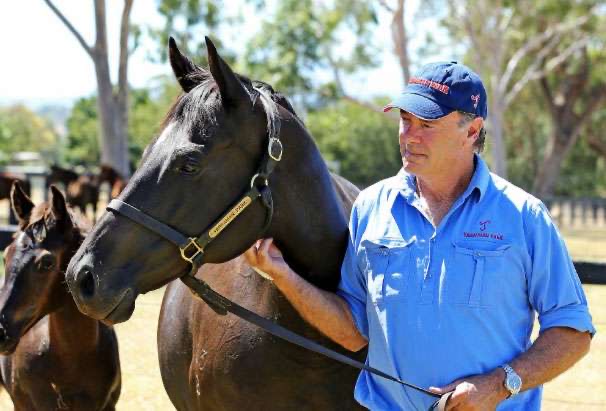 “We were not fussy!” he laughed, joking that “some of the mares were not much better than polo ponies. But from day one they could run.”

And from day one of Nettuno’s career he has shown himself to be above average with Tony Gollan ‘always bullish’.

So much so that he bid the $500,000 it cost to secure him without having any clients ready. “I had no owners in mind at all, I just loved him,” he told the press after his second win.

Noting that Nettuno was an eye-catcher from his early days, Mitchell said that “he was the best foal the mare had produced.” 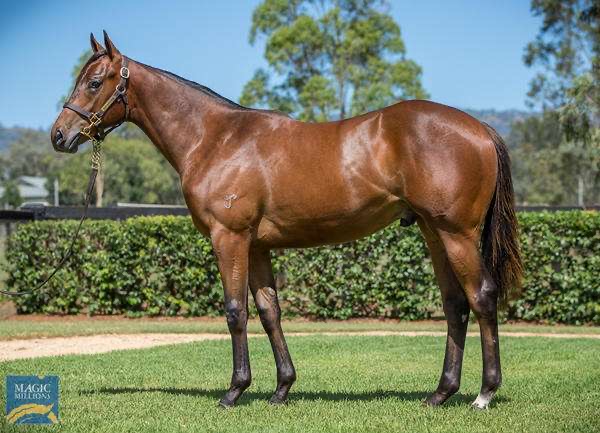 Nettuno as a yearling | Image courtesy of Magic Millions

Which was a decent wrap considering that Saint Minerva, who died last spring, has always produced lookers with her progeny in demand.

Next up was Cormac (All Too Hard), the $175,000 Magic Millions yearling who won three in town and he was followed by I Am Invincible’s Ducale who Paul Perry purchased for $260,000. A two-time provincial winner, she is not in the class of her full brother but certainly has added value now; the A List Stud-owned mare’s first foal a Deep Field filly.

Hong Kong galloper Cheerful Days (Smart Missile) was not as popular in the ring but the $55,000 weanling and NZ$100,000 yearling has done a great job amassing in excess of $1.5 million.

Retained by his breeders, Saint Minerva’s 3-year-old Cosmic Minerva (Deep Field) is under the care of Bjorn Baker whilst her Hellbent yearling colt, her final foal, fetched $210,000 to the bid of Dullingham at this year’s Melbourne Premier. 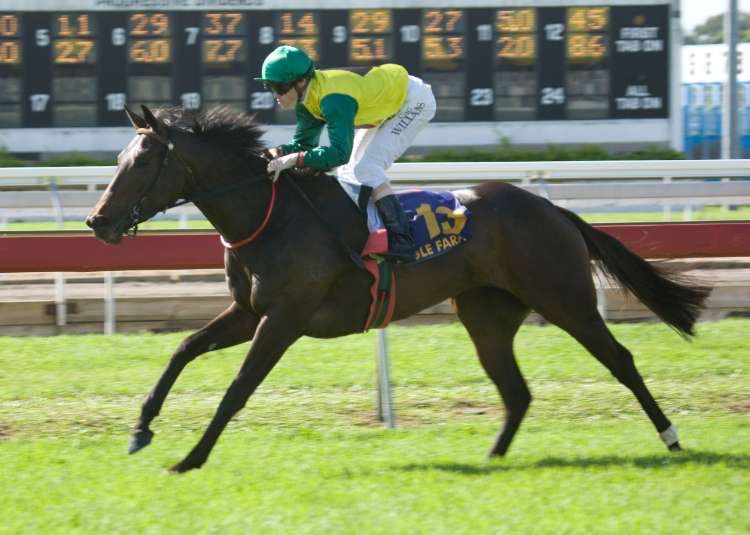 The winner of three of her 12 starts, the Alan Bailey-trained Saint Minerva drew the outside gate when contesting the 2009 G3 Grand Prix S. but despite not having the easiest of runs she was a dominant winner – putting 6l on the G1 WA Derby winner Markus Maximus (NZ) (Pentire {GB}).

Out of a half-sister to the G1 AJC Sires’ Produce S. winner Rhythmic Charm (NZ) (Sackford {USA}), Saint Minerva is one of the two mares to produce a stakes winner by I Am Invincible with the other being Abscond, dam of the Group 1 mare Invincibella.

Seven of the eight I Am Invincible runners out of Galileo (Ire) mares are winners and Galileo mares have also done a great job with Invincible Spirit (Ire) with eight stakes winners (including Coolmore Stud’s dual Group 1 winner Magna Grecia {Ire}) amongst the 54 runners. 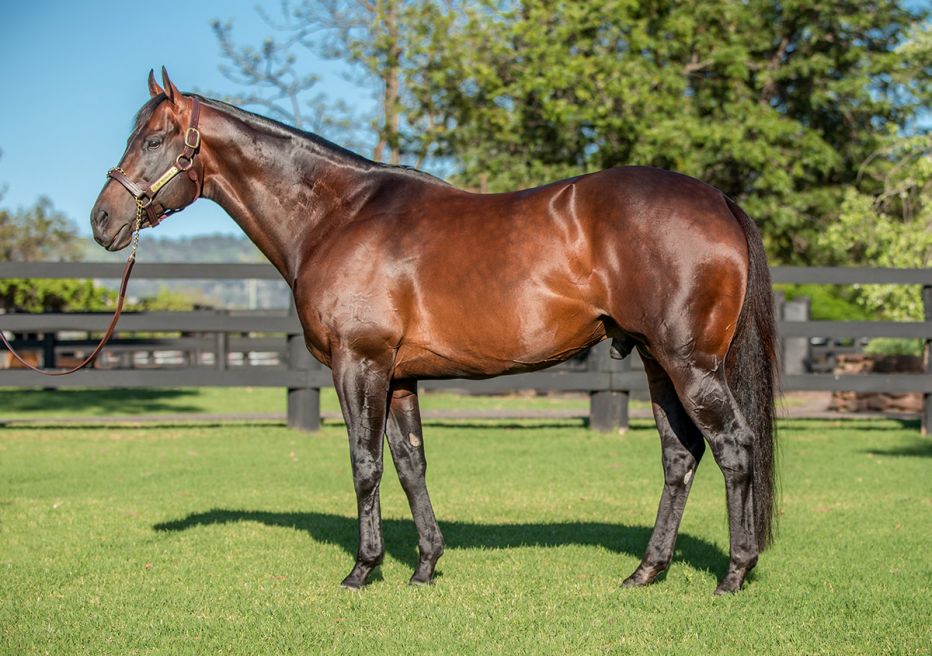 I Am Invincible | Standing at Yarraman Park Stud

Nettuno was one of four I Am Invincible winners on Saturday with the Gerry Harvey-bred Blondeau winning the Listed Takeover Target H. at Gosford.

I Am Bene (bred by Joynt Holdings) finished gamely to win at Morphettville whilst Yarraman’s homebred (with Morning Rise Stud’s Rob McClure) was impressive saluting at his Donald debut.

A maiden at Donald is a long way from black-type success at the Gold Coast but Mitchell was pretty happy about that one too. “He is the first foal for our Listed winner Take Pride and he absolutely bolted in – it was a good debut experience for him.”