I Am Invincible Rules at Inglis Easter

Yarraman Park’s champion sire I Am Invincible finished the record breaking 2022 Inglis Australian Easter Yearling Sale as the leading sire by average and also by aggregate with a glorious grey filly from Pinocchio his top seller at $2million.

Tyreel Stud have achieved sale ring and racetrack success in recent years under the ownership of Linda and Laurence Monds, but soared to a new level when selling the $2million half-sister by I Am Invincible to Everest hero Classique Legend.

An eye-catching grey filly, she is the fifth foal of winning Encosta de Lago mare Pinocchio, a full sister to champion miler Racing to Win.

Linda Monds confessed she was never intending to sell the filly and fully expected to be taking her home, but when her reserve was passed she sold to Mitchell Bloodstock on behalf of The Yellow Brick Road Company’s Phillip Visalli for $2million.

“There may be no such thing as a perfect horse, but she’s as close as you’ll get,’’ Visalli said.

“We’ve been in racing for years and have had a Group 2 winner before but never a Group 1, so hopefully this filly fixes that in the next year or two or three.

“We loved the horse, we hadn’t bought one in a few years and decided we wanted to get back involved and when we fell in love with her, I asked Bill and James Mitchell to take a look to see if they agreed with us, and they did, so we went for her.’’ 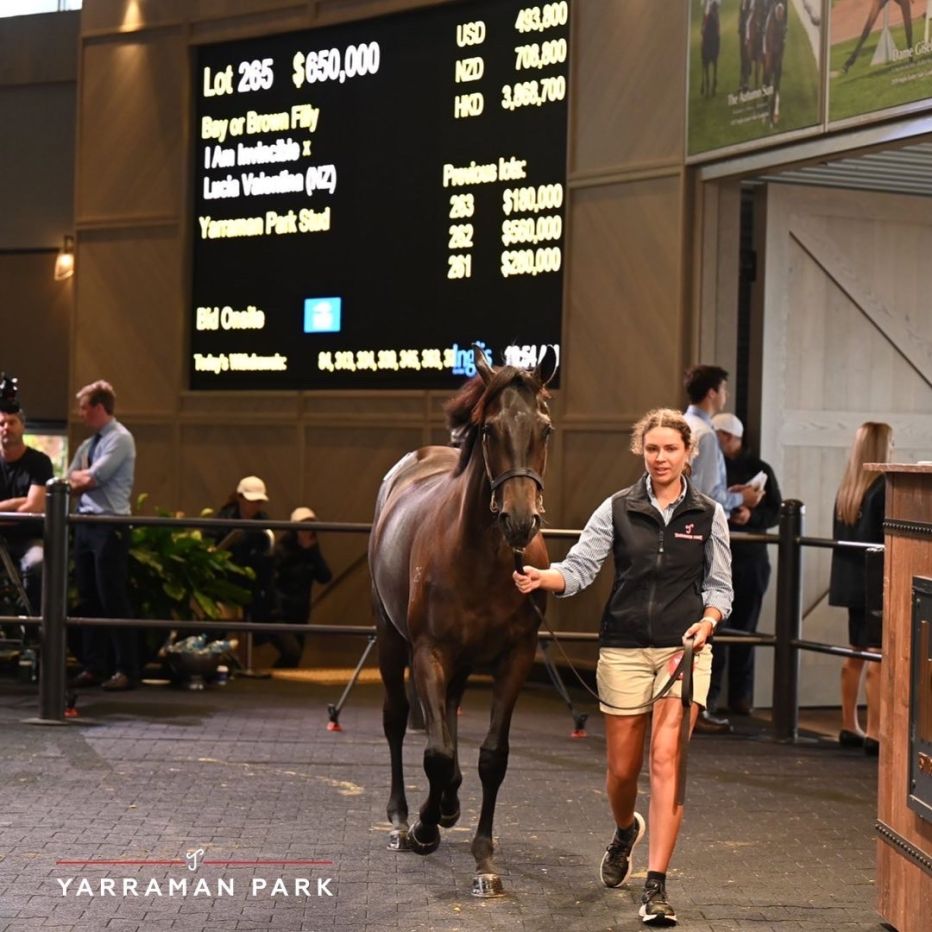 The star filly will be trained by Chris Waller and is the most expensive filly ever sired by I Am Invincible and is his equal highest priced yearling ever.

“I felt she was such a special filly and deserved every bit of the sale price she achieved,” said Linda Monds, who always planned to keep the first filly from her blue hen Pinocchio, who was bought for $320,000 from the Magic Millions National Broodmare Sale in 2014 .

“We set the reserve and weren’t going to budge, so it’s totally blown me away that she has sold.

“She has been the most heavily vetted and inspected horse we have ever had and I was so impressed with the way she handled it. I think she will be a superstar.”

I Am Invincible also had million dollar sales as follows:

I Am Invincible’s Group I winning son Hellbent also enjoyed strong results with his top seller the Yarraman Park consigned colt from Speedboat that sold for $325,000.

The half-brother to Group I ATC Champagne Stakes winner Captivant was bought by Hawkes Racing and he is also a full brother to this season’s promising 2YO Warby, who was second in the Group III Canberra Black Opal Stakes.