Promising I Am Invincible three year-old King of Sparta took another big leap forward with a record breaking win at the metropolitan meeting at Kembla on Saturday.

Sent for a spell following fourths in the Group II ATC Silver Slipper and Group III ATC Kindergarten Stakes, he returned to the track in July as a gelding.

King of Sparta promptly broke his maiden over 1150m on the Kensington track at Randwick before a troubled sixth behind Silent Impact at Rosehill at his most recent start.

•King of Sparta•
(I Am Invincible x Octavia)
An electric turn of foot was on display at Kembla today. Apart of our 2020 @magicmillions Gold Coast draft and knocked down to @Chinahorseclub, @NewgateFarm and Starlight Racing.
Congratulations to all connections!
🎥 @SkyRacingAUS pic.twitter.com/fTmS8BQ3Sc

The Peter and Paul Snowden-trained gelding faced off against a talented field of three and four year-olds over 1200m on Saturday and put them to the sword.

Appreciating a patient ride by James McDonald, King Of Sparta powered home to defeat the 4yo I Am Invincible mare Selburose by a widening three and a quarter lengths.

As a $700,000 Magic Millions purchase from the Yarraman Park draft for China Horse Club/Newgate Bloodstock/Starlight Racing, the decision to geld was not one taken lightly, but has clearly been the correct decision. 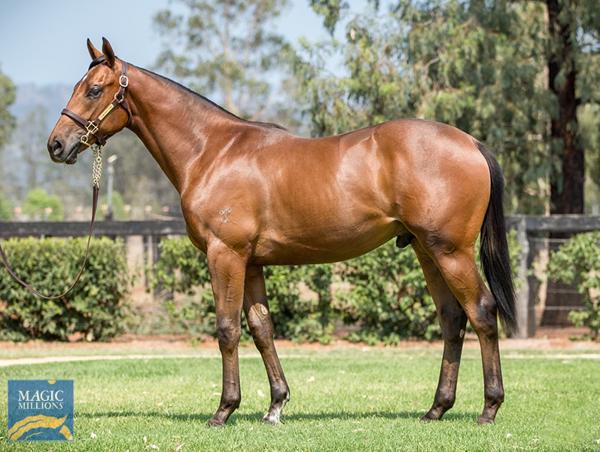 “He can certainly stretch out and run time,” Paul Snowden said.

“When ridden the right way, he has an electric turn of foot.

“He has always been a nice horse and now he has been gelded, he could go right on with it.”

King of Sparta has now won two of his past three starts and banked over $150,000 in prizemoney.

King of Sparta was bred by Yarraman Park in partnership and runs for a syndicate including Newgate Farm and China Horse Club, in whose colours he runs with Yarraman Park also retaining small share.

He is the third winner from Group III winning Holy Roman Emperor (IRE) mare Octavia, who is now back in foal to I Am Invincible.